Ready for a roller coaster ride through the socio-political and personal challenges of modern times? (Musically, that is?) After the usual pandemic-era tale of delayed gratification, Manchester art-rock quartet Weimar have finally released their debut album Dancing On a Volcano digitally via German Shepherd Records and on CD via Marlene’s Hat Records.

Delving into themes such as gentrification and cultural erosion, wolves in sheep’s clothing running society; the underbelly of glamour and glitz, and the contrast between polished façades and the decadence within. Dancing On A Volcano paints a brutal and honest picture of human nature and culture in the 2020s. We hear shades of Magazine, Pylon, and Wall of Voodoo stylistically, with the wry lyrics of The Divine Comedy.
Soho Rain, featuring Leeds-based artist Finola, is dedicated to the dying culture and artistic movements that emerged out of the old Soho district of London. A wistful nostalgia trip about the end of the neon sleaze and hazy seediness, the video glides through images of neon-lit peep shows and porno marquees as a lady smokes sultrily. Less of a song and more of a chant or invocation for a lost youth, Aidan Cross’s vocal for the track is atonal yet mesmerizing.

Earlier this year, the band also released the 2-track single “The Girls of LA.”

“The Girls Of LA” is an ode to the bottle-service girls who work the bars and clubs of Los Angeles, who use the money from their bar work to finance their wider careers in Hollywood and in the business world,” says the band. “It is written as an anthem to their business prestige and headstrong pursuit of career goals, serving as a positive reflection on the American Dream and the road to stardom.”

Weimar (pronounced Vy-marr) is a four-piece made up of vocalist/guitarist/songwriter Aidan Cross (The Bacillus, Black Light Mutants), bassist John Armstrong (The Speed Of Sound), drummer Anthony ‘Eddy’ Edwards (The Deceased) and guitarist Stephen Sarsen (Frank Is Dead, Playground). Embracing post-punk to no wave, cabaret, psychedelia, alternative folk and gothic rock, all blended in a distinctive fusion, this album was produced by Adam Crossley and Chris Guest of Vibratone Sound Studio.

Dancing On A Volcano is available everywhere, including Spotify, Apple Music, and Bandcamp. It can also be ordered on CD directly from the band. 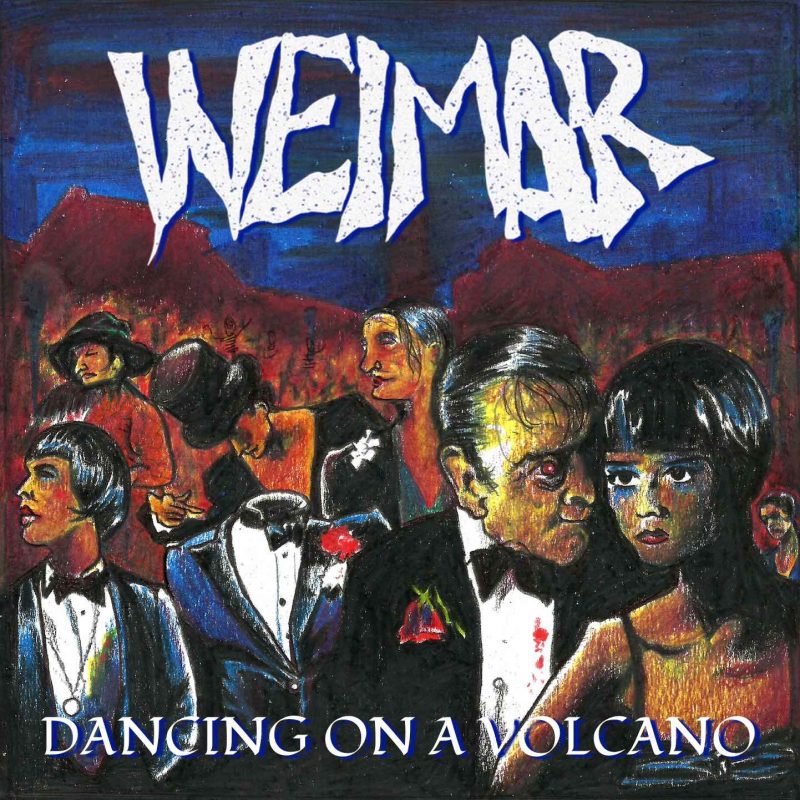