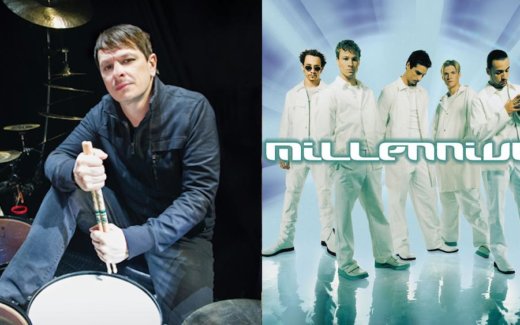 Earlier this year, nu-metal giants Korn posted a behind-the-scenes snippet from their video for the track “Worst Is On Its Way,” in which they sang Backstreet Boys‘ “I Want It That Way.” Apparently, the BSB loved the video, and reposted it. Now, drummer Ray Luzier has made it clear that he would be down to collaborate with the band.

Speaking to Sick Drummer Magazine (as transcribed by Ultimate Guitar), Ray was asked about the cover video. He explained how the footage came to be — and then said he’d be down to make Kornstreet Boys a thing:

“Right at the end, Jonathan [Davis]’s girlfriend said, ‘Why don’t you guys just do the pose that the Backstreet did?’ And we’re like, we look down, ‘Oh, that’s too good. Yeah, let’s do that.’ So it’s like, ‘Ray, get your hands like this,’ and next thing you know, it literally happened within two minutes. We took the shot, and that improvised thing you see online, and It’s obviously an improviser. We’d probably sang it way better. But we just started singing ‘Tell me why,’ [part of the lyrics to the ‘I Want It That Way’ song] and the video started rolling. And then, next thing you know, Backstreet Boys reposted it, and they’re talking about like they want to make, you know, I don’t know. That’d be really funny. Because we’ve done a lot of clients throughout the years, it’d be really funny to do something with a pop band like that, because we respect them so much.”

What do you guys think — would this be a collaboration you’d want to see? What BSB song should Korn cover? Let us know in the comments. Meanwhile, get tickets to see Korn at one of their upcoming dates with Evanescence:

The post Korn’s Ray Luzier Would Be Down to Collaborate With Backstreet Boys: “We Respect Them So Much” appeared first on MetalSucks.