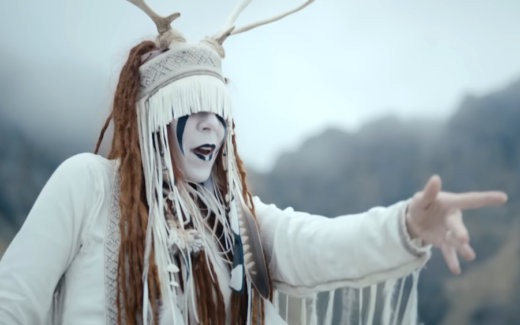 For those of you unfamiliar with them, Heilung are a European experimental music collective that look like they should make witchy black metal, but in fact make old-world folk music. The band has risen in popularity of late, in part due to their big, theatrical live performances. Now, Heilung have dropped a new single, “Anoana,” via an eerie music video, and have also revealed details for their new album.

Heilung’s new record Drif comes out August 19th on Season of Mist, and is available for preorder. The cover art and tracklisting are available after the new song.

As you’ll see and hear below, “Anoana” sounds pretty much like what Vikings would’ve played during a magic ritual. It’s a lot of acoustic drums and humming-then-whooping vocals, all set over an ancient birth rite and a ton of antler imagery. It’s not really my thing, if I’m being perfectly honest — I’m more of a Hexentanz guy, myself — but hey, if ancient European culture is your bag, this will no doubt light your fire. And it’ll probably be a campfire, and everyone will be tripping balls on the Food Of The Gods, and a huge wooden statue of a forest-born fertility god will watch over it all.

You can check out “Anoana” below, followed by the album’s details.