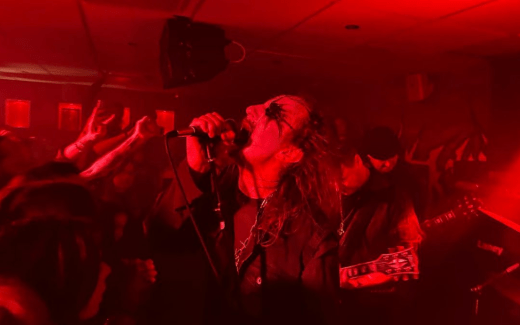 On January 7, members of the legendary extreme metal band Morbid reunited to celebrate the recent 35th anniversary of the monumental demo December Moon (1987). Morbid was co-founded in 1986 by the late Per Yngve “Pelle” Ohlin, a.k.a. “Dead,” who would later join Mayhem. Not only is Pelle regarded as black metal’s most important frontman, but he also serves as the genre’s greatest muse.

Leading metal expert Finn Håkon Rødland, who filmed the festivities in the clip below, points out that Daniel takes the stage name from one of Pelle’s drawings.

As the starring vocalist, Daniel gave the most spellbinding tribute to Pelle. During the intro, Anders held a lantern to guide a group of men carrying Daniel to the stage in a coffin — Pelle used to crawl out of one that had been procured by Uffe’s father. In the old days, Jens would throw semlor into the audience, causing concert-goers to trip on the mess. Thus, the now-psychologist and researcher offered up a silver platter of these desserts at the beginning of “Disgusting Semla.”

Watain’s Erik Danielsson, who was greatly inspired by Pelle and has helped preserve Morbid’s legacy, occupied the drums that would have belonged to “Drutten,” Lars-Göran Petrov. L-G, who became famous for his work in Entombed like Uffe and later Entombed A.D., tragically passed away in 2021.

Although Morbid disbanded shortly after Pelle moved to Norway in 1988, Pelle planned to participate in a Morbid reunion show in 1989 that was ultimately cancelled. Before his death in 1991, Pelle began rehearsing with Morbid again with the intention of releasing a 7”. Known for their remarkable camaraderie, Morbid has always honored Pelle’s memory. After getting together for some shows in 2009, they released Pelle-era material on the EP Ancient Morbidity for Metalion’s Slayer Mag (2010) and the compilation album Year of the Goat (2011).

Here’s what Finn Håkon Rødland had to say about the event:

“The Morbid gig at Klubb Fredagsmangel in Stockholm was something I really couldn’t miss. I was lucky and got a ticket. There were 180 people there, and it sold out in minutes, obviously. The evening was attended by a lot of family members and close friends, so the atmosphere was really special. Some people criticized them for choosing this small venue, but this was what they wanted to do — hold it at their friend’s venue. […] It was a fantastic night for the history books for sure[…]”

If you want to check out a longer edit of the night’s proceedings, be sure to head over to Rødland’s YouTube channel. In the meantime, we’ve got some photos from the event below.