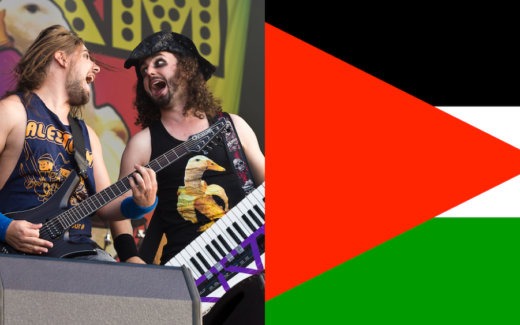 We are big fans of pirate party metallers Alestorm. However, a story has been sent to us on multiple social media platforms that we feel we should confront.

In an Instagram messaging conversation, as captured and posted on the Instagram account Eye on Palestine and posted to the Reddit page r/IsraelCrimes, the band were allegedly contacted by someone asking about the date of their show at Reading Club in Tel Aviv, to take place July 5th. When the band provided information, the person reaching out to them (unidentified in the screenshots) explained that they were a Palestinian fan unable to attend due to the ongoing occupation of Palestine by Israel, and that by performing, Alestorm are in their mind complicit in that occupation and “whitewash[ing] these crimes.”

The band’s first response was, “You should come to the show!” When the fan responded that they could not due to Israeli checkpoints, the band responded, “Come and drink RUM.”

You can find the Instagram post below, as well as screenshots of the conversations. The person in conversation with Alestorm has been identified only as “a Palestinian activist.” Obviously, Alestorm are not a band with any outward political, focusing solely on pirate fiction as their subject matter, but it’s safe to say that this was not the appropriate response to this request.

MetalSucks has contacted Alestorm’s representatives for comment, and will update this story as we know more.

This is not the first controversy that Alestorm frontman Christopher Bowes has had to deal with. Last year, a racist and sexist group chat between him and other members of his side-project Gloryhammer was revealed. Bowes publicly apologized, and took full responsibility for the incident.